It’s about time I made mention of some research on here, so I figured what better place to begin in line with my subject matter than with the origin of the term ‘cyborg’.

About a month ago while I was reading The Observer I conveniently stumbled upon a small- article celebrating 50 years of the cyborg, or rather 50 years since the word was coined given that we’re still some way off making them a reality…or are we? 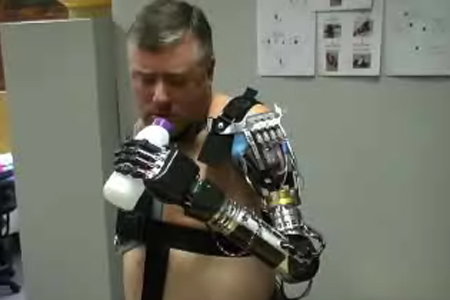 Among more extreme fictional examples such as Robocop and Dr Who’s Cybermen the article highlights some everyday examples of man-machine hybrids which are almost completely overlooked. Pacemakers and prosthetic limbs already supplement our natural body functions in a symbiotic manner, as neuroscientist/inventor Manfred Clynes is quoted saying:“You could even say that if you’re riding a bicycle or wearing spectacles, that fits the cyborg concept. There’s feedback there. You don’t have to go into space!”

Fitting words from one of the men who helped propose the cyborg concept in the 1960’s, the other being psychiatrist Nathan Kline. Much as Clynes & Kline may sound like a comedy duo their paper ‘Drugs, Space and Cybernetics’ was the first to propose the idea of ‘the cyborg’, outlining how implants delivering controlled drug doses and other modifications of man’s biology could aid long distance space travel.

Intrigued, I attempted to find the original paper, something I have thus far been unsuccessful in – I did however find an article closely based off it ‘Cyborgs and Space’ which was published in the September 1960 issue of Astronautics. This reprint may actually have been more useful to me anyway as it apparently summarises the key concepts of the paper, likely giving a scientific dunce such as myself a better chance of following.

As with their original paper, the article outlines the possibilities the proposed cyborg might offer to space exploration while also making an argument against the practicality of the existing externalised life support:

‘Biologically, what are the changes necessary to allow man to live adequately in the space environment? Artificial atmospheres encapsulated in some sort of enclosure constitute only temporizing, and dangerous temporizing at that, since we place ourselves in the same position as a fish taking a small quantity of water along with him to live on land. The bubble all too easily bursts.’

As with the fish out of water analogy, the typical space craft presents a sizable risk of the environment being punctured and destabilised along with the constraints of a finite air supply, placing an immediate limitation on the distance which can be covered by astronauts. The solution? To make adjustments to the astronauts themselves.

That’s right, no craft or spacesuit, man in space ‘qua natura’ as they put it, sounds insane right? But they manage to suggest a solution to virtually every body process which would be effected by the vacuum. This is not to say any of these solutions are particularly pleasant or fool proof, I suspect NASA would have a hard time finding volunteers willing to have their gastrointestinal tract sterilized or be kept in state of controlled hypothermia for reduced metabolism. It’s all far from perfect, but they make a firm point of almost all required technology being in existence and in some case having already been tested (that’s right, cyborg rats). That this tech was available as far back as 50 years makes the mind boggle.

Technicalities of the solutions aside, there’s an interesting paragraph where they emphasise the importance of all said systems being made to function autonomously, without need for management or maintenance on the part of the subject lest they become ‘a slave to the machine’. This idea fascinates me – that as soon as we must continually operate a machine in order to survive, then the control is no longer in our hands, as we are in a sense being controlled by the machine. Ironic when I consider my own dependence on plumbing, refrigerators and cookers – am I a slave to these machines because I need them to live?

The article hits another sizable obstacle near the end and a fundamental point in any cyborg concept when it approaches human psychology. No matter how well thought out it may be in practical terms, there is always, always the unpredictable human element to deal with; in this case the main problem being the sensory deprivation that comes from long exposure to a featureless void (as you might have with a space suit). Humans have an inevitable ‘desire for action’ and when they attempt to fulfil it with no feedback from the surrounding space to demonstrate it as being ‘purposeful’ the likely result is psychosis.

To summarise the point in broader terms, no matter how much machine you put in the man, there’s still going to be a human mind in there somewhere along with all associated baggage. It’s these themes that I wish to explore in my own project, considering how drastic human modifications might function in everyday life, and for that matter, whether they’d really function in a desirable fashion at all.

‘Solving the many technological problems involved in manned space flight by adapting man to his environment, rather than vice versa, will not only mark a significant step forward in man’s scientific progress, but may well provide a new and larger dimension for man’s spirit as well.’

It’s about as sad as it is amusing that the cyborg’s greatest legacy has probably been to fiction rather to science (with rare exceptions such as the work of Professor Kevin Warwick), while it has rarely preached an idyllic man-machine symbiosis so much as tales of excess, dystopia and repression. I think it’s a safe bet this isn’t the legacy Clynes & Kline had in mind when they rote their paper all those decades ago. In the Observer article, Clynes is quoted as saying “Films such as Terminator sadden me because they misinterpret the message”. Indeed.

All  the same, it’s because of my continual affection for, and interest in the cyborg that I am doing this project now, while the allegorical comment of society’s dependence upon the machine is as relevant today (if not more so) as it was fifty years ago. Perhaps the message has been misinterpreted, but its given rise to a whole new set of fascinating questions and thinking in turn.

This entry was posted on Monday, November 8th, 2010 at 7:31 PM and is filed under Research. You can follow any responses to this entry through the RSS 2.0 feed. You can leave a response, or trackback from your own site.