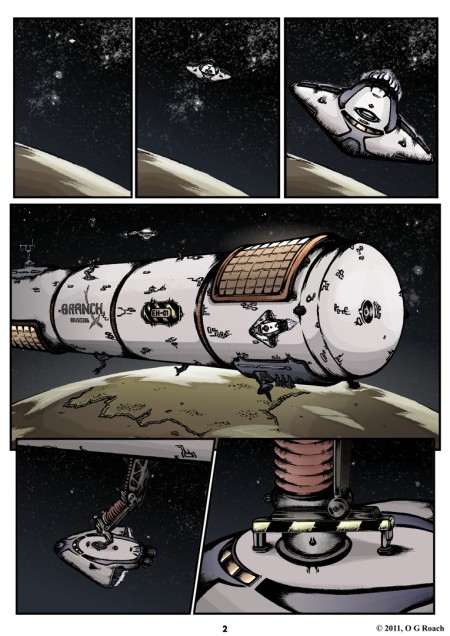 Seems I’m starting to get faster producing these things, though there were some tricky aspects to the page all the same.

If I was channeling Frank Miller for my cover, here it would be fair to say I had Stanley Kubrick on the brain; specifically my recent viewing of 2001: A Space Odyssey. Besides having one of cinema’s most memorable barmy computers and a practically unmatched epic scope the film struck a chord with me predominantly thanks to its meticulous space sequences and establishers. Modern sci-fi has a tendency to rush by the details of  technology and travel, whereas 2001 took it’s time to set the scene and let you soak it in.

Branch is really not intended as a space opera in spite of the story taking place on board the titular station, rather this is a means to isolate and more sharply define the cyborg focused society. At the same time it’s of distinct importance that I establish my world and its situation early on, while emphasising the other protagonist’s arrival. Once things move inside the station there won’t be much in the way of external establishers so all the more reason to take a page out showing it.

As mentioned drawing it proved trickier than I’d initially thought though. The issue with space settings in comics is that the dark composition tends to absorb traditional black line work and swallow up the overall image as a result. To get around this I took some artistic licence and lightened things up a little opting for a dark blue rather than pitch black backdrop, something which fits nicely with the blue-brown colour palette I’m developing.

The stars also proved a problem as it was hard to find an intensity that seemed credible without drowning out the foreground images. Hand drawing them didn’t really work, so in the end I created a texture in Corel and applied it as a translucent layer over my backdrops picking out a few brighter stars here and there for good measure.  It’s not a perfect fit for the graphic style but it’s infinitely better than my initial astral scribblings…

Finally, there’s the earth itself. This was something of an afterthought, but as it came to colouring it occurred to me that the traditional old green and blue might not be the case with our future home world. Call me a pessimist but it seems a fair bet that the planet won’t look quite so pristine in the near future; hence the lean towards polluted grey-browns (which again conveniently fits with my overall colour scheme). It sets a grimmer tone than I initially intended maybe, but it does serve as an effective signifier that time has passed and things have become more desperate.

This entry was posted on Monday, May 16th, 2011 at 5:08 PM and is filed under Production. You can follow any responses to this entry through the RSS 2.0 feed. You can leave a response, or trackback from your own site.