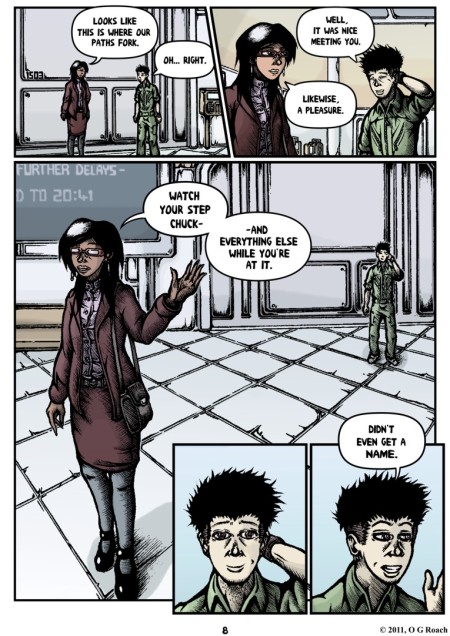 I drew up the linework on holiday to avoid a complete hiatus, though drawing in the face of strong winds at the beach wasn’t the best of ideas, nor was trying to draw straight lines in a moving car…

Anyway, with this one I wanted to change the atmosphere giving the sense of breathing room after the claustrophobic tunnel and airlock. I was advised to pull back more by Paul Gravett so I’ve done just that with the middle panel, emphasising Alexa’s departure (for now) and the new spaceport setting.

In relation to this I cranked up the brightness of the colours aswell, going for more in the way of  antiseptic whites and light blues while intensifying the characters. This may seem counter logical given the used future setting and noir influence, but I feel this is a good point to visually emphasise the ‘calm before the storm’; the story is destined to head into gloomy murk soon enough and a little contrast seemed like a good idea. Besides this, in reality airports frequently have whitish colour schemes and if anywhere on the station were likely to be well maintained it would be here.

I should also mention I made a notable alteration from the script here with Curt’s reaction. Originally he didn’t say anything after Alexa walks off, but it occurred to me how odd it seems they didn’t introduce themselves at all. As such I felt an acknowledgement in the dialogue might be a good idea, while lending a bit more colour to Curt’s personality in the process. Alexa also developed to be more flirtatious than scripted in drawn form so the suggestive response seems believable enough.

On the negatives: I can’t help feeling I could have done more with the space, especially that middle panel. Maybe a few passers-by or more scenery would have improved it. I dunno, but a bit more care in future compositions wouldn’t go amiss. That and a few instances of dodgy anatomy continue to irritate as usual.

Not a great page then, but at least an adequate one and a reminder of where I need to work harder.

This entry was posted on Tuesday, August 23rd, 2011 at 6:20 PM and is filed under Production. You can follow any responses to this entry through the RSS 2.0 feed. You can leave a response, or trackback from your own site.