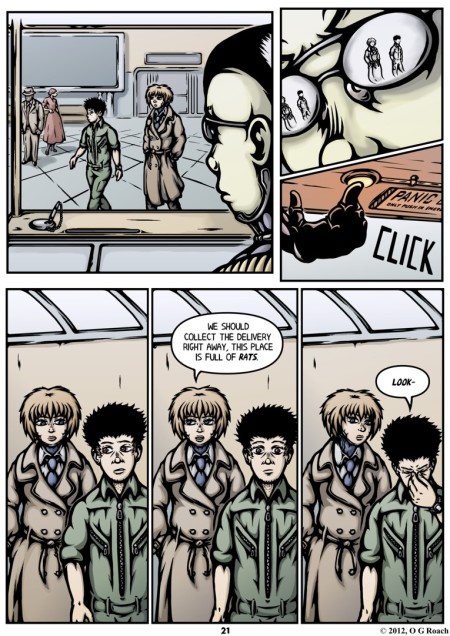 Excuse me as I pick the tar out from between my toes (see the end of the last post). Obviously out later than planned though hopefully better for the extra spit and polish here’s page 21!

There a few things of note here, mostly in relation to the change of scene as we return to the spaceport lobby. For one it should be evident to anyone who flicks back to page 11 or earlier how much the rendering of the art has changed; linework and colours are far cleaner and less murky creating what I hope are clearer, stronger images. It’s annoying that the stylistic continuity has taken a hit in the process but it’s better that the larger changes are made now than later, in an ideal world I’d redraw the backlog but time isn’t on my side so for the immediate present I shall be pressing on…

The colours themselves aren’t as striking as with the previous scenes, moving back to a less restricted more subtle palette of oranges and browns off blues and greys. Besides the practical change of location and consequent lighting I felt that it was time to turn down the intensity for a little while and wind up the tension again for the next major beat of the story – in relation to this, I’d like to draw attention  to the use of repetition on this page.

Pauses and reoccurring elements if used heavy handedly are liable to simply create tedium, but they can also help garner a sense of unease between events, creating a rising rhythm and suggestion that we are waiting for something to happen. Emphasising an awkward pause in a comic is an odd affair as sense of time is often determined by reading speed; a dramatic moment the author intends to be held may well be skipped over in an instant by an impatient reader given that they are ‘in control of the acquisition’ (Eisner, 1996, page 52).

What I’ve done here in effort to create the impression of an uncomfortable pause is use three panels that are almost the same but with varying details; I didn’t want to just repeat the same image three times with gratuitous copy and paste – it tends to derail my immersion in a comic when I see recycled art – so I reused the composition for each but gave the characters slightly different expressions and poses, thus holding the moment while hopefully avoiding tedium or literally appearing to stop the comic.

An additional area of pseudo repetition I’d like to point out is the first panel; an entirely new drawing but with composition which echoes a panel from page 11 (looking past the security guard over the desk) and to a degree the first panel from the previous page. Whether these touches register with reader subconsciously or knowingly it should in theory dial things back a few notches while maintaining the feeling of impending danger I’ve been developing along the way.

One last minor mention I should make is that I changed the colour of Scratch’s trench coat now that it’s in neutral (i.e. not green) lighting. In early concept art it was greenish-grey but it struck me that brown-beige was a better fit for both the character and comic’s colour schemes, it also pushes it closer to the kind of 1940’s trench coats I based it’s look off in the first place.

That’s all for now folks!

This entry was posted on Monday, April 30th, 2012 at 2:26 PM and is filed under Production. You can follow any responses to this entry through the RSS 2.0 feed. You can leave a response, or trackback from your own site.