The truth no matter what: Transmetropolitan

During my recent trip to Orbital Comics for the Jack Kirby exhibit I had an inevitable moth-to-flame reaction seeing their generous shelves and was pretty much set on buying something. So it was that I spotted Transmetropolitan going cheap and – recalling Cyberpunk review’s praise of the series – decided to give its first two volumes Back on the Street and Lust for Life a go in the name of research and entertainment. 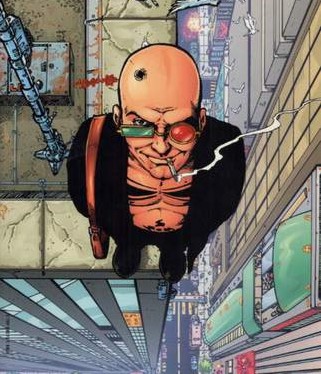 I must admit that I’m unfamiliar with the work of the writer Warren Ellis but right from the first issue a firmly satirical tone is established. Garth Ennis of Preacher fame writes the first book’s introduction, which along with his summation that ‘Warren doesn’t like “nice” things’ gives you a fair idea what to expect. This is a cyberpunk future which plays out less like Blade Runner and more like an ultra-violent version of Futurama – naturally those easily offended need not apply.

With the story beginning ‘up a goddamn mountain’ we’re introduced to Spider Jerusalem; Transmetropolitan’s protagonist of colourful name and even more colourful personality, in his fifth year of isolation sporting an Alan Moore haircut which would have Robinson Crusoe green with envy. It’s cyberpunk tradition to have alienated, offbeat characters at the heart of their stories however that might be something of an understatement here.

An infamous gonzo journalist forced out of his mountain refuge by unfulfilled book contracts, Spider makes for a fascinating contradiction as the living, beating, hateful heart of the comic. His profession and reputation inevitably suggest involvement in culture, politics and the media – the issue being that he hates all three with a vengeance. Seemingly a complete misanthrope, prone to substance abuse and short-tempered outbursts he’s unpredictable at the best of times with the welcome knock on effect being the unpredictable course taken by the narrative.

To my mind at least the other major character is the sprawling metropolis suggested by the title (assumedly an amalgam of major American cities), a place which begins to seem less like a setting and more like a collective antagonist thanks to the views of our warped anti-hero.  Thrown head first into this world much like Spider, the sense of chaotic over-saturation is palpable but the real accomplishment is seeing the diverse groups, technologies and icons start to become recognisable facets of the series. Like most good sci-fi a sense of underlying cohesion and inner workings are gradually established within the universe without resorting to blunt exposition at every turn. Darick Robertson’s art is fairly straightforward in style but accomplished and packed with background detail featuring lots of humorous little touches, each adding something or at least giving you an unexpected laugh.

Following some aggressive bartering for his old job and an accident with a shower/’physical cleaning unit’ which fixes his hair problem, Spider almost immediately sets out to report on a brewing catastrophe; a pocket of social unrest revolving around ‘transients’, humans who have partially adopted a template of alien DNA in a bid for sovereign rights. As expected it’s with a cynical sense of opportunism that he approaches the group, his unimpressed stance towards the minority emphasised during the interview as he labels them “body perverts”.

Up to this point I had some growing niggles over the underlying themes or rather, lack there of. With the city and its culture portrayed unsympathetically as crass and chaotic alongside an equally unsympathetic narrator there are certainly plenty of parallels to modern life and dark humour to accompany it, but without reasoning or any form of moral focus it looked like the series was fated to slide into crude nihilism. Thankfully matters take a U-turn as the story climaxes. With the police moving in to brutally crush the transients, Spider impulsively enters the war zone and – taking to the roof of a nearby strip club alongside its employees – begins to write.

It’s here that his true colours shine through as we see an altogether different side to Spider Jerusalem; a man passionately obsessed with the truth above all else and infuriated with the hypocrisy and lies which surround him. As his furious report is transmitted live across the city formerly unseen sympathy for the transients crops up while an insightful reveal of police corruption behind the riot suggests a sharper mind than we’ve been led to believe. To make an analogy of it, Transmetropolitan turns out to be much like Spider himself – seemingly crude and heartless at first glance belying the intelligence and care that runs beneath. For all his unpleasant habits, illegal acts and sudden outbursts of violence our journalist isn’t quite the monster we’re initially led to believe.

Considering the two volumes I read as a whole (the aforementioned scenario being just one of the stories) so far it’s typically been episodic with Spider doing everything from reports on religious conventions and an ill-advised day watching future television to dodging assassination attempts. There are however characters and subplots which extend throughout, with the most notable one surrounding his assistant Channon and the crumbling relationship with her boyfriend. Other threads at the moment appear to still be building to something with the payoff assumedly further down the line, either way it all helps construct an intriguing worldview and suggests more interesting developments ahead.

Considering relevance to my own work beyond the obvious cyberpunk connection, I’m aiming to keep the tone of my own graphic considerably more muted but there are some technological ideas worth taking note of; familiar science fiction clichés are presented then deconstructed in interesting or humorous ways with cryogenic revivals becoming the new unwanted immigrants of the future, adverts subliminally beamed into the mind for dream playback and household fabricators with a taste for hallucinogen’s.

One page in particular caught my attention during an explanation from Spider about the process of “downloading” where through nanotechnology people can be converted into a cloud “foglets” free of conventional human form and its attached concerns. As he outlines:

“If a guy has a prosthetic leg, is he still human? Sure. It still does the same job, does what you tell it to. So how about if he had two artificial arms? A plastic heart? Carbon-fibre bones? Artificial neurons? Where do you stop being human? (…) You could put a human mind into an entirely artificial body and that person would still be a person. You could download a mind from out of its — let’s face it — eminently crappy, badly designed human body and into a seriously useful and functionally immortal artificial form.”

It’s this line of thought which is pretty much the driving force behind my own narrative, contemplating the humanizing of machines instead of dehumanization through them while it’s also another fine example of how the comic offsets its absurdities with genuinely sound ideas.

I can only guess where it’s all going but Transmetropolitan’s first two volumes deliver a sound introduction to a universe packed with satire, humour and ideas. It has no time for sensitivity but is far from being mindless having things to say about the society of today many would rather not acknowledge. It isn’t “nice” but it may just be brilliant.

And hey, why take my word for it? Vertigo has put the first issue online to read for free :)