I’ve just finished the first module of my MA, requiring me to submit a second proposal and run a presentation. Beyond meeting the obvious demands of the course this gave me a chance to reflect on the research and planning I’ve covered thus far, while also considering some criticism the panel gave me. My script is still in flux and concepts are being continually redrawn/imagined, but I have some aspects of the project which I now know to be certainties. So, it is these ‘sacred cows’ that I shall run over (sorry, that sounded wrong) – ahem – that I shall summarise here. 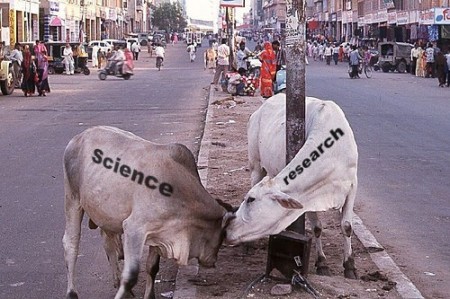 First of all there’s the matter of scientific grounding: from the very start I had the intention of basing as much of my setting in scientific fact and theory as feasible. I hesitate to suggest everything will have such a basis – there’s a good reason I didn’t pursue a career in cybernetics and as fiction it would be a shame if I didn’t have a little fun with things. All the same it’s my firm intention to maintain a reasonable level of credibility amongst the sci-fi and steer clear of some more outlandish ideas I might be tempted by. Greater realism means greater credibility, greater credibility means greater immersion.

In line with this credibility there’s my decision to firmly stick to a used future aesthetic. I’m hardly saying I want my cyborgs to be rusting piles of junk staggering around a post-apocalyptic scrap yard (did I just describe Battle Angel Alita?), but at the same time giving machinery, clothes and the surroundings a sense of usage and history seems far more realistic than off-the-production-line sheen. Precisely how I’ll manage this remains to be seen, but my drawing style tends to be inherently quite rough around the edges and consequently fitting to the desired look.

Then there’s the matter of my central pairing: My two main protagonists Scratch and Curt will be forced to work together by an unfortunate turn of events, consequently having to put aside personal prejudices and their general dislike for one another to resolve matters. Clichéd as it may sound this relationship is intended to be beneficial to both sides, each somehow addressing the weaknesses of the other. On the one hand the newcomer Curt is a very human character, but at the same time remains deeply cowardly and phobic. Scratch – a heavily modified cyborg – is someone who is strong with a great deal of integrity, but ultimately deluded about herself and the role the machine takes in her life. At the risk of sounding pretentious I could say this impromptu partnership is symbiotic much as the relationship between organic and mechanical in a cyborg is… but I’ll spare you and just say I’m still ironing out the details on this one.

Finally there’s my commentary. What exactly am I trying to say here? It’s somewhat traditional of most cyberpunk to imply that machines and technology have some sort of dehumanising effect upon people, but is this really fair? Couldn’t we argue that machines are humanised through human usage? Much as we move into a new house and decorate to our tastes, couldn’t we consider technology to be implemented into our lives similarly? Even this blog is a fine example; I’ve taken a bunch of templates and default settings, then customised them in accordance with my (worrying) personal tastes. I’m not saying technological advancement is always inherently good news given evidence to the contrary, but realistically speaking I’ve seen too much good done by it for outright condemnation to makes sense. It is thus that I wish to counterbalance more stereotypically negative undertones with a fair respect for technology’s positives as well.

So yeah, not many certainties yet but I’m about 99% sure that all of the latter will form some part of the finished graphic novel. The rest remains embryonic but bare with me and I’ll make this baby yet…

This entry was posted on Saturday, January 15th, 2011 at 1:23 AM and is filed under Planning. You can follow any responses to this entry through the RSS 2.0 feed. You can leave a response, or trackback from your own site.