Serial Experiments Lain is a strange series; take that from a strange man with strange tastes. It’s an experience which is intriguing, disturbing, frustrating and depressing in equal parts but ultimately rewarding providing you can see it through to the end. 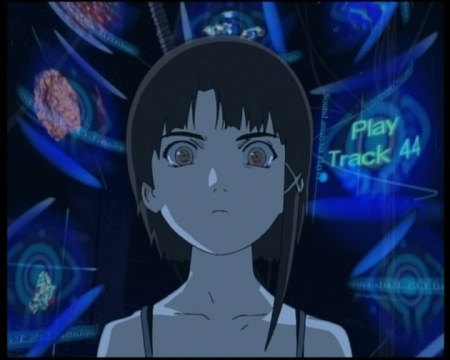 It’s true that the cyberpunk is often plundered by anime for its sci-fi aesthetic and dystopian themes, but what sets Lain apart from these neighbours is the thought with which it addresses the genre’s ideas. Rather than using it as a mere dressing for action and entertainment it concerns itself heavily with the underlying technological and social concepts along with a dose of existential philosophy and theology. There’s an almost novelistic feel to its approach reminiscent of something William Gibson might write, never being afraid to challenge the viewer or experiment in ambiguous territory.

At the same time, this makes it so obtuse and idiosyncratic in places that many will be put off by its sheer lack of accessibility; Lain demands your full attention and reflection to make any real sense of it. I still find parts of the story infuriatingly oblique even after a second viewing and yet in spite of this I still find something about it utterly compelling. Like I said: strange.

Based in a world with an alternative take on the internet known as ‘the Wired’ what’s perhaps most startling about this setting is its uncanny resemblance to the network society of today. Aspects of it remain intentionally outlandish, but the base depiction of its pervasive social importance is more relevant today than when series originally aired in 1998. Even the wired enabled phones aren’t too far off our own modern equivalent. 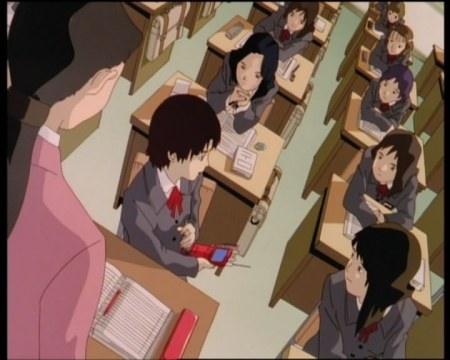 In contrast to this, Lain herself initially has little understanding or interest in “connecting” with others over the wired or in reality for that matter. I’m sure mention of having a 14 year old schoolgirl as a protagonist is likely to provoke eye rolling from certain quarters, but our central character here is somewhat removed from the usual cookie cutter pubescent. Alienated and unresponsive to the point of appearing autistic; Lain’s initially vacuous nature makes her perfect to introduce the details of the setting through while her social ineptitude and distant family quickly draws viewer sympathy. In essence, she has more in common with the anti-hero detective figures of cyberpunk literature than most anime heroines.

The style of the animation is also distinctly offbeat. The character designs are closer to realism than the medium usually offers with a colour palette which is more often restrained to drab browns and greys than colourful alternatives. At the same time an atmosphere of discomfort is nurtured by an overpowering sense of the mundane, while elsewhere surreal little touches hint at something unpleasant lurking beneath this everyday veneer. Shadows are speckled with red blotches perhaps in reference to blood, while the seemingly omnipresent dark cabling of the wired fractures and webs scenery with its humming menace.

The story is kick started when e-mails are sent around Lain’s class allegedly from a girl Chisa who committed suicide just a week before. The rest of her classmates take it to be a distasteful prank however Lain, intrigued by what she’s heard dusts of her neglected Navi (their equivalent to a PC, not a blue cat alien :p) and investigates. Discovering a similar e-mail she questions the departed as to why they died, the ominous reply being that “god is here”.

Throughout the following episodes Lain gradually becomes drawn into a mystery involving a group of hackers known as the ‘Knights’ in worship of this internet god and the ruthless ‘Tachibana Labs’ who are seemingly set on thwarting them. Vague hints at the underlying plot and dark machinations are thrown up in a manner typical of a techno-conspiracy thriller, however far more interesting than this – though ultimately tied to it – is the development of Lain herself.

As she delves deeper into matters her computer skills rapidly develop, visually represented as her outdated Navi is replaced with a top of the line model which in turn is progressively modified; growing from a desktop device to a formidable setup which fills the entire room. Her personality also quickly develops as she becomes bolder and more assertive,  managing to befriend a classmate Alice and beginning to behave more sociably.

All this could be seen as puberty cyberpunk style, but at the same time stranger things accompany it. Rumours filter back to Lain about her appearing in places she’s never been behaving wildly out of character, while her reputation on the wired starts to take on an inexplicably legendary quality she never seems to have earned. Worse still, she is plagued by increasingly nightmarish hallucinations of phantom figures in reality, appearing to originate from the wired itself. 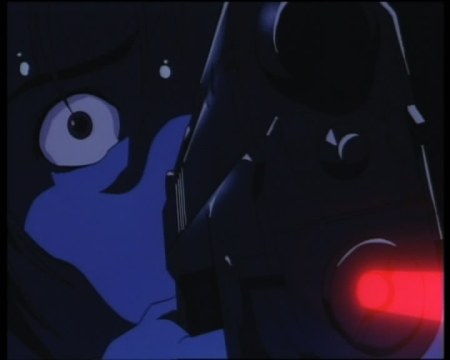 Things come to a head as stories of “the other” Lain suggest she spread scandalous rumours about Alice, while the hallucinations begin to manifest for other people besides herself. It’s also the point at which the series seemingly starts to unravel, buckling under the weight of its own mystery poised to irrepairably fall apart into pretention, when something even stranger happens:

It starts to make sense.

Just as I’d convinced myself the series no longer had any idea where it was going the seemingly unrelated threads mesh together with a coherency which pulled the proverbial rug out from beneath me. The central idea – that ‘god’s’ plan is to break down the barrier between the wired and reality – admittedly pushes credibility even under the banner of ‘cyber-fantasy’ but is presented with such immersive conviction that it’s rendered wholly believable from a dramatic standpoint. It also makes for a worryingly relevant allegory of our current society in which the internet is of increasing importance in day to day life, as Lain herself eerily phrases it: “no matter where you go, everyone’s connected.”

As reality begins to crumble the self appointed ‘god’ finally reveals himself to her as Masami Eiri; a deceased scientist responsible for the wired upgrade causing the bizarre incidents. Formerly believed to have killed himself under a train, he now resides as a consciousness in the wired – a sinister figure of assured control and near unlimited arrogance with the goal of making the world cast off flesh in favour of a supposedly limitless existence over the network.

More importantly though, light is finally cast on Lain’s role in these events. Isolated once again through the destructive rumours regarding her alter ego, she questions Masami as to who or what she really is, with the response being that she is “software”. Created by him to help implement the breakdown between wired and reality, Lain is a sort of physical embodiment of the process; something which explains the abnormal development of her technical proficiency and initial alienation. We’re never offered a clear-cut explanation as to whether she’s a GM construct, a machine or some form of shared hallucination originating from the wired though it’s a vagueness which I feel actually preserves much of the series’ credibility; keeping the details ambiguous and leaving the viewer to decide, while also making the whole internet god/reshaping reality plot line easier to swallow.

With Masami set on using Lain to implement his plan, he initially tries to coax her into cooperation but failing this resorts to threats and force – Lain’s defence and crushing blow to his networked ego being that his assurance as an omnipotent being is undermined by reliance on ideas and physical hardware created in the real world, which he is now fatally powerless to interact with minus a body. Thus it is that ‘god’ implodes in a startlingly violent puff of logic.

Far from resolving matters though, this climax only serves to create a larger dilemma for our central character as she is effectively left in charge of the wired and by extension (thanks to Masami’s tinkering) reality. Assuming the responsibilities of a god she is offered the chance of reshaping reality to suit her own desires, but ultimately rejects it in order to fix the lives of her friends and family which have been left largely in tatters at this point thanks to bizarre events surrounding the wired – the unfortunate implication being that she herself won’t be remembered and “what isn’t remembered never happened.” 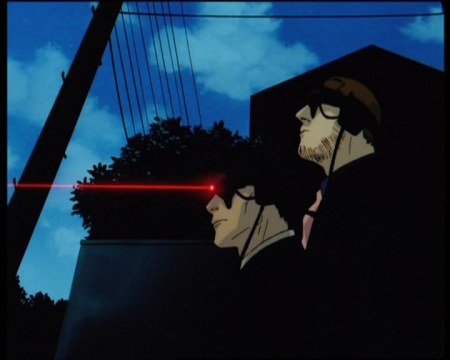 Perhaps more than any other element in the series, the ending is left open to personal interpretation – inevitably garnering a few aggressive internet forums in the process – but my own feeling is that Lain herself is intended as a metaphysical representation of the network society, her different egos paralleling those of the internet: some wise, some unpleasant some insightful and some disturbing. Considered as an embodiment of this, Lain represents the near unlimited potential of the net counterbalanced by the inevitable faults inherited from its creators.

Serial Experiments doesn’t always hit the mark, often being strange for the sake of strangeness but it’s a negligible footnote when the series achieves so much along the way. Comparable with everything from Neuromancer to The Matrix perhaps its greatest triumph is that it maintains such an original voice amongst the genre while quietly worming its way under your skin. Uncompromising and fearlessly unconventional it’s definitely up there with cyberpunk’s finest. 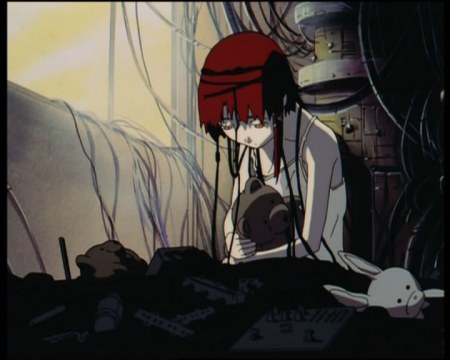 This entry was posted on Thursday, May 5th, 2011 at 8:14 PM and is filed under Research. You can follow any responses to this entry through the RSS 2.0 feed. You can leave a response, or trackback from your own site.