It’s been a while since a work of fiction has given me nightmares. Before I crashed head first into puberty just about anything could scare me, with glimpses of TV past 9 p.m. or the child catcher liable to provoke frantic checks under the bed and a flashlight clamped within sweaty hands for the next few evenings. Still as time presses on and experience adds up one can’t help but be desensitized to the scares of old, making the genuinely horrific all the more memorable for its scarcity.

So it is that when I say Arkham Asylum: A Serious House on Serious Earth (1989) is the stuff of nightmares, I mean it. This is less heroic empowerment fantasy and more intense psychological horror. 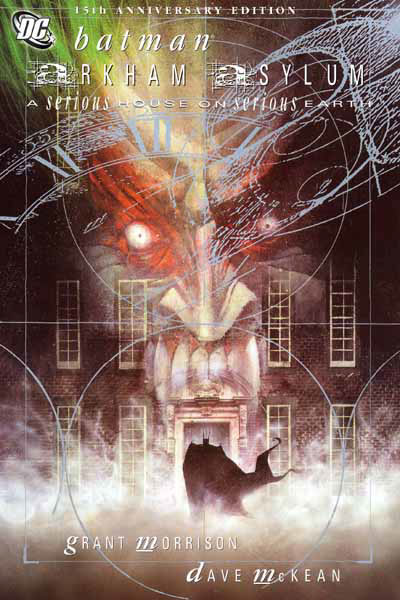 The 80’s had already seen one industry grabbing reinvention of Batman in the form of Miller’s The Dark Knight Returns (1986) but it would perhaps be more accurate considering Arkham to be a deconstruction of the iconic crime fighter. For the most part, in spite of the Caped Crusader’s presence this rarely feels like a hero comic; casting off the usual adventure elements in pursuit of something much more surreal and disturbing.

The writer Grant Morrison – now a well renowned industry figure – describes the comic as being a reaction to the ‘very literal, “realistic” “left brain” treatment of superheroes’ which had become popularised at the time by Watchmen (1987) and its ilk. Here with our ‘hero’ being coerced into visiting the titular psychiatric hospital by a hostage situation, the story presents a far more vulnerable and uncertain Batman than most other works in the canon, standing in sharp contrast to the decisive, powerful vigilante imprinted on the cultural consciousness. While violence is present, the focus is moved away from physical confrontation towards something of a philosophical battle against Arkham’s inmates with the core of the narrative possessing a dreamlike tone. In essence an offensive is taken on Batman’s sanity, challenging the formerly clearcut boundary between hero and psychopath, questioning whether he really belongs outside at all.

Amplifying this unsettling atmosphere by no small amount, the unique artwork of Dave McKean doesn’t so much add to the comic as feel symbiotically integral to the experience. The illustrations possess an unconventional painterly quality, avoiding the medium’s typical hard lines and flat colouring in favour of expressive blurring and gritty, dense texturing. It’s a style which also has enormous range going from eerily realistic to bizarre photo collages and surreal imagery – perhaps to reflect the changes in mood and gradual erosion of sanity throughout. Apparently McKean has retrospectively criticised his approach at the time as hampering the storytelling, but ironically I feel it actually strengthens it. 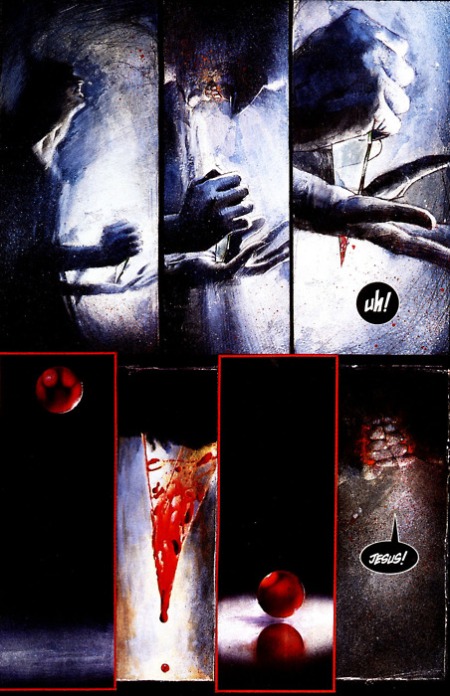 There are other clever little visual touches too such as the pencil sketched scenes near the beginning, emphasising a tangible sense of dreariness to external reality before entering the asylum. Character designs take on a distinctly unusual quality aswell; the Joker in particular possessing devilish, bulging features and an over-exposed glow of white make up making him seem more inhuman than ever. Batman meanwhile often appears animalistic, with the suit appearing to be inseparably fused to the man echoing his namesake in the most literal sense and giving him the air of some sinister gothic monstrosity. As the joker puts it when a henchmen suggests unmasking him: “That IS his real face.”

I’m still missing a large portion the story here though, while it might be assumed Batman is automatically the central character he shares a significant portion of the narrative with Amadeus Arkham, the asylum’s troubled founder. In a thread running parallel to the hero’s we see how the founder attempts to cure madness in others only to be inevitably consumed by it himself, creating a worrying comparison to Batman’s own crusade against crime. Just as Amadeus is shown to be far too close to insanity to define it himself, under scrutiny Batman is not too dissimilar to the colourful villains he locks away – a traumatized vigilante dressed as a bat suddenly struggling to justify his actions.

It gets under the skin and presents a disturbing perspective on the Batman mythology, but remains utterly compelling from start to finish. Most superhero narratives see their leads become dispirited and drop the ‘super’ mantle at some point or another, before reclaiming it to ‘become’ xyz-man again. Arkham Asylum takes a unique path by having Batman do the exact opposite for its conclusion – to admit that when all’s said and done he really is “just a man”. 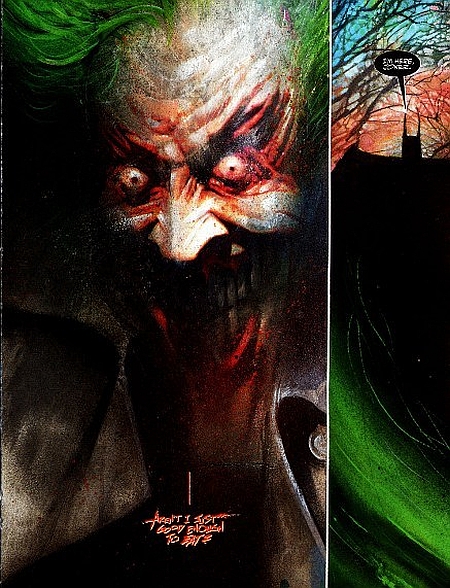 Contemplating its wider context, I imagine this was a considerably important stepping stone in the continued evolution of comic books as a creative medium too. Neil Gaiman’s Sandman (1989-1996) and its metaphysical themes feel like a logical continuation of those sparked here, while I doubt that Dave McKean’s involvement as cover artist was coincidental either. I realise the relevance to my own work is pretty tenuous in most respects, but I felt there was value in writing about Arkham – if for nothing else – because of its daring  experimentation within a genre which often feels constrained by convention and for how considerably removed it is from my usual reading material.

To put it another way: anything which has the power to give me nightmares these days has definitely got something right, though it may still have some ground to cover on the child catcher…

This entry was posted on Wednesday, October 19th, 2011 at 1:57 AM and is filed under Research. You can follow any responses to this entry through the RSS 2.0 feed. You can leave a response, or trackback from your own site.

2 Responses to Arkham Asylum: A Serious House on Serious Earth