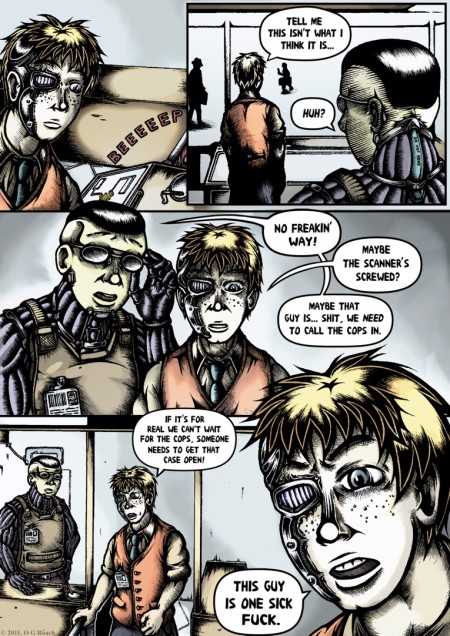 What was it I said about taking a ‘ridiculously long time’ last page? The only excuses I can offer up for the majority of the delay this time are obsessing over trivial details and my typically slow technique. I would have had it done a little sooner but after being struck by another ocular migraine – and foolishly attempting to ignore it – I ended up wasting a day recuperating in the dark. Ack.

Putting pathetic excuses aside though, what of the page? Well, ignoring the obligatory botched panel – I swear there’s always one – I rather like how it turned out.

As you may have noticed the layout and composition is much tighter here than in previous efforts. I tried to use space as efficiently as possible overlapping panels and going right to the edge of the page. This was partially to introduce more variety into my presentation and escape more predictable templates, but also to reflect a shift in tone as the plot begins to gather momentum. With the discovery of Curt’s unexpected cargo a more intense atmosphere takes hold of the story, so I wanted this emphasised by the more claustrophobic arrangement.

I tried to take more risks with shading/colouring than usual too; exaggerating the monitors glow to draw attention to the unsavoury discovery. Not strictly realistic, but hopefully a fitting stylization to help the transition over to the more intense pages which will follow. Also, take note of the slightly more noirish features appearing in the 2nd panel, something else which should hopefully prevent the aforementioned transition from jarring with earlier material.

As is becoming an unavoidable habit, I deviated from the script here again on two major points. For one, I cut away the arrival of Scratch  at the spaceport since it seemed unnecessary and somewhat deflating for her entrance in the next scene (more on that when I’ve drawn it). Secondly, the dialogue between the attendant and guard here became considerably more explicit, which might seem like a silly matter to draw attention to but it struck me as being a great deal more credible. When things go wrong the common man is less likely to spew out carefully considered prose than they are to erupt into swearing.

There are inevitable detractors, with the bottom left drawing being a little sketchy and the backgrounds maybe being a touch too crude for my liking but I feel confident that the tone of the page hits the mark pretty squarely at least. Anyway, with the plot getting more exciting now the next few pages should be a lot of a fun to make :)

This entry was posted on Friday, November 4th, 2011 at 5:36 PM and is filed under Production. You can follow any responses to this entry through the RSS 2.0 feed. You can leave a response, or trackback from your own site.