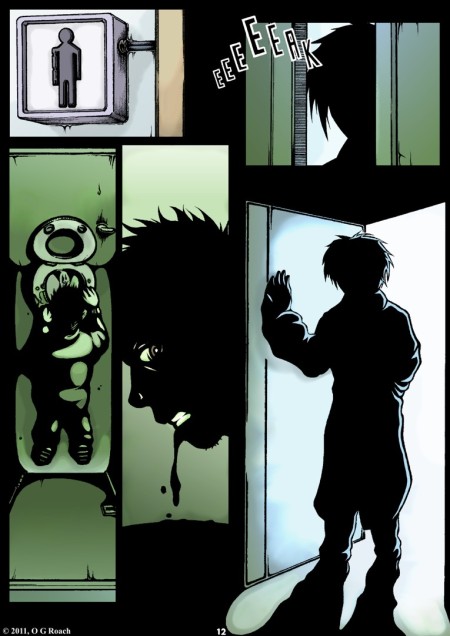 With this page I tried to take some risks with the style and use of colour to match rising tension with appropriately intense visuals, something which bizarrely may have reduced production time on paper and digitally. I would probably of had this one out in three to four days if I’d worked straight, but prep for the symposium and my computer’s current helpful habit of locking up every few minutes (thank you again repair centre) held it back a bit.

I’ve tried to make a stronger connection to my noir influences here by using heavy shadowing in place of crosshatching; hence why drawing took less time thanks to details being obscured. It’s primarily a stylistic development but to keep it credible I’ve had it brought in with a scene change to somewhere which would assumedly be darker instead of the washed out spaceport lobby. It’s also worth noting that by blanking out the features of the entering figure (Scratch) we get a sense of Curt’s situation within the cubicle – being unable to determine their identity, enhancing the sense of an unknown menace.

Special mention should also be made of the colours. Thus far I’ve predominantly stuck to browns/oranges complimenting greys/blues in an effort to manifest the clash between organic and artificial at the heart of the story. What I can’t help but think though is that Curt forms a sort of anomaly in the scenario, being completely human and unfamiliar with the station and its occupant cyborgs.

When choosing colours for my character designs I decided on the green colour scheme for Curt to emphasise his personality and flaws. So it is that here I’ve drenched the toilets in overpowering shades of green in an attempt to subconsciously extend Curt’s character to the environment and atmosphere; emphasising his phobia’s, sickness and generally cowardly nature without having to unload a ton of exposition on the reader. In the same way the blast of blue light which accompanies Scratch’s entrance contrastingly emphasises her cold personality and firm manner, while also enhancing the sense of her bursting in on Curt’s life as the blues run over the greens.

I’ll tentatively say that I’m happy with this one as it seems to deliver the sort of striking impression I’d envisioned in the script. I worry that the flow of the panels could be clearer perhaps, while it’s let down by some of my usual wonky anatomy but otherwise it turned out much better than I frankly expected it to.

This entry was posted on Sunday, November 13th, 2011 at 10:00 PM and is filed under Production. You can follow any responses to this entry through the RSS 2.0 feed. You can leave a response, or trackback from your own site.