I’ve decided to try something new here; given that lately I’ve had difficulty finding time for research writeups and been increasingly locked into production itself it seemed a slightly different approach might be in order.

Up till now I’ve largely written about films, comics and other illustrative sources in a kind of review style which has been stimulating and a lot of fun, it has however proven to also be quite time-consuming. I’ve looked at a lot of sources which have influenced my artwork and storytelling but often not had time to acknowledge them properly as I felt obligated to do a lengthy analysis or nothing at all.

To change things up a bit I thought I might do a few smaller summaries of ‘influences’ giving a concise rundown on exactly what I like about them, why they’re relevant and what I should take from them. I’m not going to stop doing longer reviews altogether, but this way I can cover a lot more material and prevent embarrassing periods of inactivity on my blog.

So, without further ado…

Hellboy Volume 1 (Library Edition) containing Seed of Destruction and Wake the Devil; a rather generous Christmas present from a good friend. I’d heard lots of other big names in comics talk about Mignola’s work but previously my only real exposure to it had been through the brilliant (though sadly unsuccessful) TV pilot to The Amazing Screw-On Head. 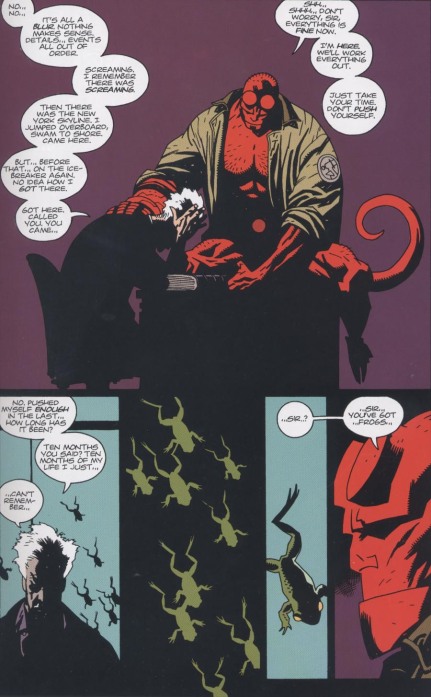 Lots. Admittedly the story and characters are a little too dry for my tastes to begin with but it’s quickly made up for by bold artwork, strong atmosphere and a quirky sense of humour. Similar to Miller’s approach with Sin City, Mignola’s art style creates dramatic images that are in many ways remarkably simple; what it lacks in detail it compensates for with eye-popping contrast of ink black shadow and colour with strong composition. Special mention should additionally go to the memorable character designs and use of typography too. 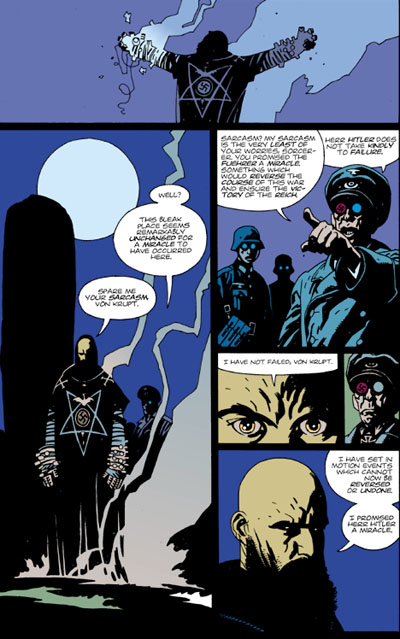 How is it relevant to my own work?

Being placed firmly within the fantasy genre thematically there isn’t much relevance to a cyberpunk comic, on the other hand, stylistically I found a great deal to draw upon. While the visuals seem to have more of a gothic than noir lean, they adhere closely to the idea of ‘less is more’ with details tending to be minimal or abstract. Almost every scene is bathed in pitch black shadow with emphasis upon highlights and silhouettes, nurturing a brooding atmosphere and fitting sense of lurking danger. Handled differently it might have appeared clumsy and incoherent but Mignola always knows exactly what to exaggerate and what to hide.

What Hellboy demonstrates is that not seeing everything can result in imagery that is not only economical but more distinct and eye-catching than a cluttered maximalist approach creates in many cases – suggestion rather than rigid visual explanation if you will. Being so understated the art doesn’t always amaze on an obvious level perhaps but it’s always clear, streamlined and effective.

This entry was posted on Wednesday, February 29th, 2012 at 1:50 AM and is filed under Research. You can follow any responses to this entry through the RSS 2.0 feed. You can leave a response, or trackback from your own site.