Page 22 + Printing for the Expo

Well here it is, the conclusion to Branch issue 1… 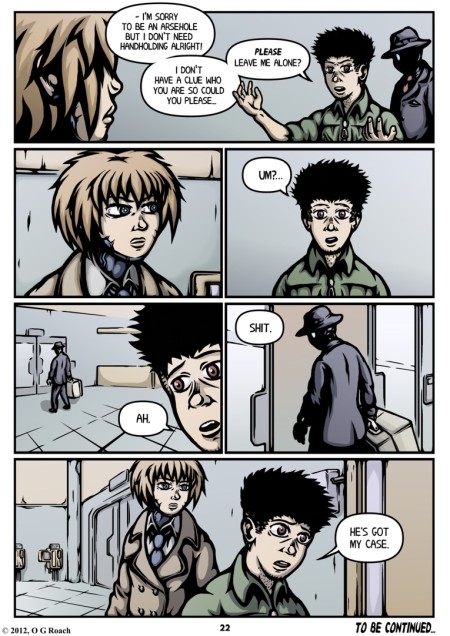 This may not be my best page but at least it gives some sense of the issue/chapter going somewhere as the threads mesh together. Curt realising his delivery has being stolen more or less concludes the introductory section and marks an important shift towards the main plot.

On the downside I haven’t covered anywhere near as much of the story as I would’ve liked though. The first third of my script was written with the intention of setting everything up and giving readers a balanced cocktail of excitement, drama, intrigue and dark humour; as it is I manage about half of that first act here, with the majority of my favourite moments infuriatingly just around the corner. There’s no use in dodging it, I need to work faster.

Not that I haven’t been working hard. I doubt it shows in the finished piece but I seriously short-changed Mr. Sandman this weekend finishing this last page for the printers. I’ve still got red roadmaps all over my eyes and the kind of complexion which has people barricading doors and brandishing crucifixes…

Still, I guess it was a valuable lesson in working economically, I didn’t get time to do everything I wanted to with this page though maybe that was the point. While the backgrounds are a little sparser than usual and the shading less detailed the flow appears reasonably clear. I could quite easily have spent another four-five days polishing this up and adding things in but would it have been worth the additional wait? Maybe having an unbreakable submission deadline yesterday demonstrated the kind of discipline I’ve been lacking till now.

Anyway on that note it’s at the printers now and will be ready just in time as I leave for the MCM Expo. As planned I’m going with an A5 colour format going for a suitably modest price of £4-5 – I’ll see how it sells :p Given that it’s the first time I’ve done something like this I’m naturally terrified, but like everything on this project I’m sure it will be a useful experience even if it isn’t a massive success. I’ve had various people telling me to get my work out there in physical form so I can at least say I’ve finally given it a shot – that and seeing other folks at the comic village should also be a lot of fun!

I’ll post again before I set out to London, in the meantime I just need to make sure I’m prepared. Stay tuned.

This entry was posted on Tuesday, May 22nd, 2012 at 4:15 PM and is filed under Production. You can follow any responses to this entry through the RSS 2.0 feed. You can leave a response, or trackback from your own site.

2 Responses to Page 22 + Printing for the Expo