It can’t be denied, the blog and progress on Branch have not been forthcoming recently. The final part of my Marvel study is yet to materialise and I’m overdue by a long way on that next comic page, still I haven’t been sitting around in their absence.

This week I’ve been voluntarily helping out with a kids’ workshop themed around Andy Warhol with activities taking place between the local Ferens Gallery – which is hosting an exhibition of his work – and Hull College. I realise this is someway off the topic of my usual posts and might seem a little strange, but I’d like to briefly share a few thoughts on the experience.

See the thing is, I had it in my mind that I couldn’t deal with children. Hearing that I’d be assisting with a group of 12-13 year olds brought back memories of myself at the equivalent age along with my less than exemplary behaviour; I wasn’t the worst pupil in my class but a good long way off the best. More than anything, I felt like I was returning to my dreaded secondary school years; an era I doubt I’ll ever recall fondly thanks to my then crippling social ineptitude and distinctly unmotivated attitude. However, at the end of the first day on the workshop I made a surprising discovery: I don’t actually hate kids. 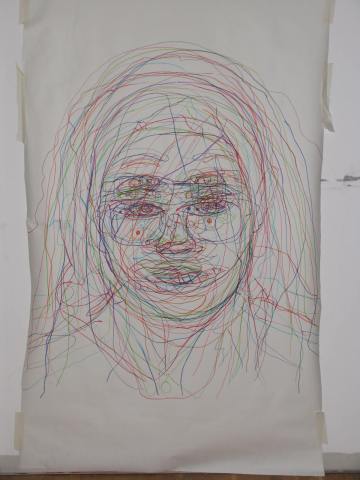 Maybe we lucked out getting a more studious group or perhaps I was just unrealistically pessimistic but I was actually impressed by their unfettered enthusiasm and creativity. Rather than being simply ‘bearable’ as I hoped I genuinely enjoyed working with them and helping them out. Given their seemingly inexhaustible energy it’s certainly been a draining week but it was also a breath of fresh air that I may well have needed to clear out my psychological cobwebs.

On a more project relevant note I was particularly fascinated by how technically savvy they were; I may have grown up as the internet went mainstream and mobile phones went from clunky oddity to essential accessory, but this is a generation coming of age in a media saturated world of YouTube, smart phones and increasingly miniaturised computing. At an age when I was being given patronising run downs on the correct meaning of ‘ICT’ and word processing, these guys are using Photoshop – many for the first time – and getting to grips with complicated techniques and effects within the space of two afternoons.

Indeed, sitting down to talk informally with a group of them during lunch break I was astonished by their understanding of networking and computers – which is not to suggest they don’t have a lot to learn but compared to what I knew at their age it marks out just how much has changed. For better or worse the times they are achangin’ and what we’re seeing now marks out a trajectory of our increasingly symbiotic relationship with the ever advancing march of technology. Frankly I’m torn between feeling exhilarated and terrified when I think what kids like these will be capable of in a decade or two.

Call it corny if you will, but all in all this week has been an unexpectedly uplifting, inspiring experience. I often feel that adulthood is accompanied by a wave of cynicism, which – while largely being inevitable and frequently prominent in my case – can feel suffocating from time to time. I’m not saying I’ll run out and adopt orphans or anything, but stepping out of my own life for a week and seeing things from a truly youthful perspective has been a veritable lightning bolt to my creative batteries.

So, without further ado I’ll stop prattling on now and start putting my money where my mouth is…

This entry was posted on Friday, June 29th, 2012 at 8:27 PM and is filed under Miscellaneous. You can follow any responses to this entry through the RSS 2.0 feed. You can leave a response, or trackback from your own site.