I must admit recently I had lost track of the college’s lecture programme, having missed a fair number of talks under the assumption they were on hiatus before learning they’d restarted again. We’ve previously had some very interesting and inspirational speakers from a wide variety of mediums and last week’s was no exception.

I felt  Paddy Hartley (or ‘Patrick Ian Hartley’ as he’s sometimes known) was worth at least a brief mention here as his work stems from interests in body modification that are comparable to my own. As his website puts it, the majority of the art’s focus is on ‘the way in which the human body is changed, modified and reconfigured either by choice or circumstance’ – unintentionally or otherwise, it certainly has a post-human ring to it. 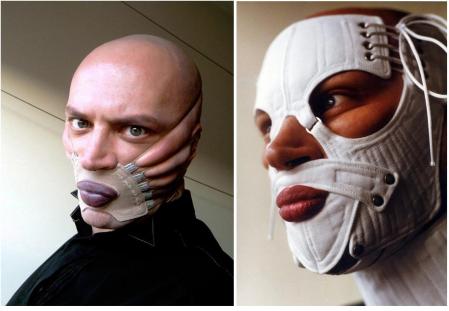 Originally commissioned a decade ago for an exhibition ‘Short Cuts To Beauty‘ at London’s V&A Museum, the striking ‘face corsets’ pictured above and below were made by Hartley in response to a variety of inspirations. Besides projecting a grotesque parody of cosmetic procedures and ways they lift and reshape the flesh he revealed a deeper, more scientific dimension to his work aswell; as part of his research into the project he worked with a biomaterials scientist Dr Ian Thompson, specifically learning about ‘bioactive glass’ and its use replacing damaged parts of the skull due to its remarkably bonding properties with organic matter.

What’s most interesting about all this is that it was a genuine collaboration with benefits to both sides. Hartley learned a lot about facial reconstruction and anatomy from Dr Thompson, however Dr Thompson was reputedly able to refine the casting of implants and further the field generally thanks to Hartley’s expertise in molding techniques. Having ruminated on the possibility of science doubling as art in my Power of Making write-up this certainly makes another strong case for it. 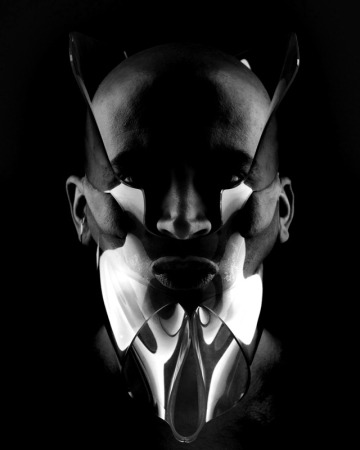 Considering the visual impact of these pieces on a purely visceral level I get an odd sense of conflict. There’s something mildly disturbing, even intimidating about them but in another way they’re actually quite beautiful; despite having no idea how to work a sewing machine when he initially embarked on the project they display a high level of refinement and thought in their design and construction while apparently being rather durable to boot – they’ve even made it through wind tunnels intact!

It seems to me that this conflict extends to the various contexts they’ve been used in aswell; besides garnering artistic acclaim in recent years the corsets have made a rather sizable splash in the fashion world, while Hartley also begrudgingly admitted they’d attracted fetishistic interests he’d rather have avoided. It could be that this diversity in interested parties and applications tells us something about the diversity in reasoning for and connotations attached to body modification generally. Just as one surgical implant might save a person’s life another may be there for altogether more aesthetical reasons.

In line with this, the talk took on a far more serious tone when he discussed one of his other projects ‘Facade’.  Similar to the other collaboration he worked with The Gillies Archives (named after the pioneering plastic surgeon Sir Harold Gillies) focusing on the ‘untold stories‘ of WW1 soldiers who’d suffered severe facial disfigurements. The final pieces (below) integrate photographs of the men in question alongside messages from their letters with replica army, naval and airforce uniforms. 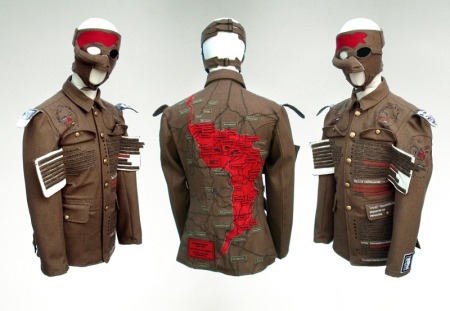 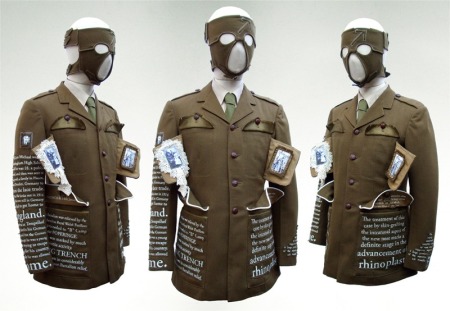 The masks in particular are a unique touch, with fabric representing the servicemen’s injuries and the then cutting edge processes used to reconstruct their faces. Hartley didn’t elaborate on the exact reasoning behind this design but for me at least it seemed to emphasise the process of repair and replacing what was lost – something my own graphic holds at the heart of its themes.

As a part of all this, he insisted on showing photographs, drawings and diagrams of the men he’d based these outfits on and as much as it shames me to say it I had a hard time looking at many of them. I don’t consider myself particularly squeamish nor am I one to judge on appearances, but seeing such traumatic injuries and thinking about the pain they’d suffered was something I found surprisingly affecting. More than anything, I just felt angry with myself for having this response; given my subject matter can I really justify horror and disgust towards disfigurement and reconstruction when it’s at the heart of my own story? 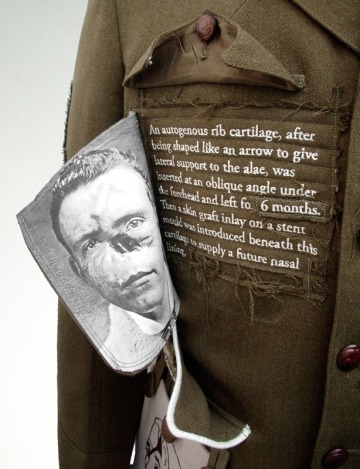 It’s true that Branch is predominantly populated by characters who’ve already undergone a procedure for cyborg modification and replacements, while for many it’s meant to have been a voluntary rather than necessary decision. Regardless, after seeing historical examples of surgical repairs I feel as though I may not have attached enough weight to the issues I’m tackling.

Besides his aesthetics, if there’s one thing I should definitely take from Paddy Hartley’s work it’s the importance of being able to face the seemingly unpleasant with an open mind rather than revulsion and a blind eye. I might be working in science fiction, but I’d do well to remind myself from time to time of the realities that underpin the ideas and very real people who live them.