Science as Art?: The Power of Making

Having been in London over the new year, on a whim I visited an exhibition ‘Power of Making’ on its last day at the V&A. Featuring an eclectic array of modern objects including traditional craft, robots, designer lingerie and – most notably in my case – prosthetics, initially I felt so enthused by what I’d seen I’d intended to write about it fresh off the train. That was until the work in waiting collapsed on me when I got home…

Fortunately however I took some detailed notes, so even while my inspiration may have lost some steam in the past few weeks, I only had to open my pad to find it again. 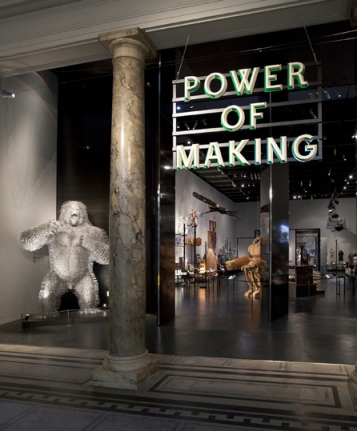 Entering, the eye is immediately drawn to Michael T Rea’s A prosthetic Suit for Stephen Hawking with Japanese Steel (below) a fittingly bizarre construction for a bizarre title. In terms of design it bears resemblance to the power loader from Aliens or an anime style mecha but what really stands out is the fact it’s made of wood. The sort of object we would normally expect to have a metallic production line sheen suddenly adopts an unexpectedly DIY quality, a garden chair dimension that makes it feel more ornamental than it would have in steel or iron. 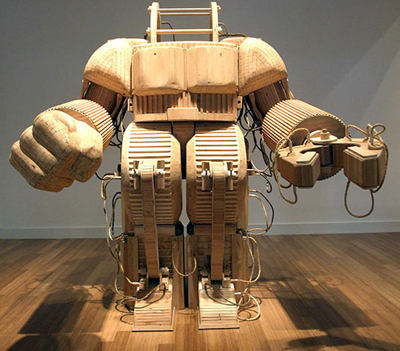 Following this line of thought, perhaps the intention in using such unexpected building materials was  to make an otherwise impressive creation obviously ridiculous. The title suggestion of Stephen Hawking using this suit in place of his wheelchair is amusingly extreme but also appears to be pointing a finger at the excesses of science fiction, emphasising the gap between the realities of modern machinery and the romanticism of its fictional counterparts. In spite of the obvious lavish care that has gone into its construction, I suspect the motives behind ‘suit’ could be more pessimistic than they seem; expressing disappointment rather enthrallment over the development of technology to date. In other words: where the hell are the androids and flying cars we were promised?!

Contrastingly though there was also a great deal of very real technology on display. Strolling by the unsettling gaze of some artificial eyes I stumbled upon a familiar object:

I wrote about the i-Limb Pulse prosthetic in a previous post and indeed, it was an unexpected delight to see a real one in the gallery. With each finger visibly powered by a separate motor and the apparent dexterity to do up a belt or shoelaces, its marvel is made all the more impressive in light of how recent such developments are; according to the accompanying information (and my own research) prior to 2007 prosthetic hands were typically three-fingered claws, with the same basic pinching action for every task. To have such massive breakthrough’s in the field from this and the Deka ‘Luke arm’ promises much for the future, with the advanced cyborgs of SF not being so far off after all.

Beyond practical and humanitarian prospects though, the i-limb’s presence in the exhibition sparked another interesting thought: can science and its connected technologies be considered art?

The porcelain eye patch above from ProAesthetics designed by Damian O’Sullivan was on display along with a crutch of similarly decorative design. As the name and image implies this was originally intended to make typically sterile prosthetics and assists more aesthetically pleasing by introducing decorative qualities, however the accompanying notation explained they were never put into production being deemed too impractical and having outgrown their function.

From my perspective these objects did seem ostentatious, but why is that the case? Why exactly are more artistic or culturally refined qualities deemed inappropriate in the supplementation of injury or disability? Are we simply conditioned to expect utilitarian design in such areas or does it arise from some deeper psychological impulse relating to the context of damage or dysfunction? Why does it seem strange to decorate an eye patch but not a tea set?

Their presence in the exhibition solidifies their status as art but seemingly moves them away from serious use enforcing the idea of a divide between application and decoration, but there are other ways the matter might be approached. 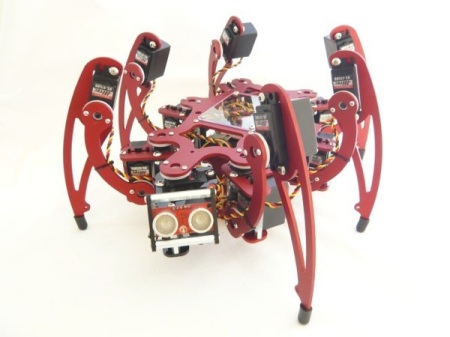 The ‘Hexapod’ robots (above) from Micromagic Systems were busy shuffling around a corner of exhibition in their distinctly eccentric manner, their Johnny 5 eyes creating a sense of amusement rather than Terminatoresque foreboding. Regardless, they have impressive applications that could potentially change much in the near future; fitted with interchangeable toolheads and capable of repair or fabrication tasks in awkward places, as the placard put it they ‘promise a world in which factory-style production roams the earth’.

Continuing in this vein, nearby there was also a row of advanced 3D printers; technology which may well become readily available to the common household in years to come with the idealised vision being ‘a machine with the potential to make itself’. If the Hexapods promise a world of roaming factory production, what if these printers promised an industrial revolution within the household? What’s more, suppose such printers came into widespread use of artists in construction of their work? Even if there is a firm divide between technology and art, couldn’t we say that they are interlinked regardless? Sewing machines, pencils, brushes and camera’s may not be appearing on pedestals but they still play an important part in the creation of art. Perhaps this is the ‘power of making’ that the exhibition title itself speaks of.

The lines are ultimately pretty blurry on which of our creations qualify as art and which don’t, which are a boon to human causes and which are a blight but I firmly believe that it is this inherent duality, this sense of contradiction which fascinates and compels so many of us to pursue and develop these inventions. Perhaps it was the show’s most startling juxtaposition which spoke loudest and most clearly of this;  a glass case containing a pair of objects, both beautifully hand crafted, both of similar size, both a similar composition of metal piping with completely polarised applications.

A flute and a shotgun.