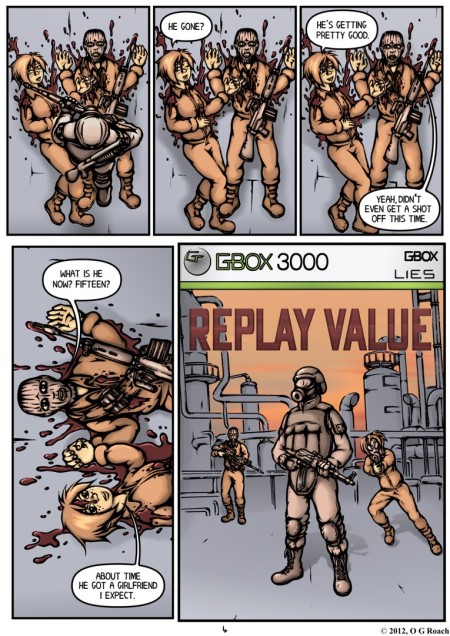 Done! Massively late but here it is nonetheless; the concluding page of Replay Value!

It’s been a busy Christmas to say the least, there was a house move in there somewhere amongst all the food and booze and besides struggling to sit down and finish this thing the page itself had a few troublesome spots. Wanting to raise the quality of the finale typically resulted in a bloated schedule – like my stomach post Xmas – such are the perils of being one’s own master…

I’ve also got something of a postscript I want to write on my inspiration for this one, however I imagine it’ll be a sizable essay in itself and right now I’ve got to stress out over a few other things for the next 24 hours or so. I’ll see that it arrives ASAP along with the massively overdue continuation of my old flame Branch.

Apologies to everyone I’ve spectacularly failed to follow and communicate with this yuletide – I haven’t forgotten you and I’ll hop back on the digi-wagon very soon, honest!

One more to go! 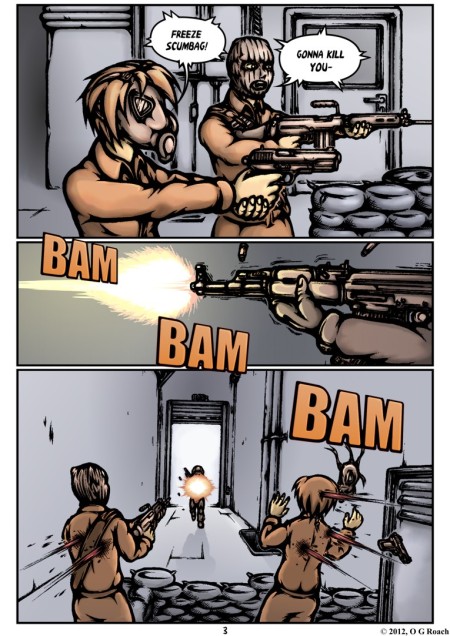 I am going somewhere with the gunghoism and violence here so bare with me, all shall be revealed! ;) 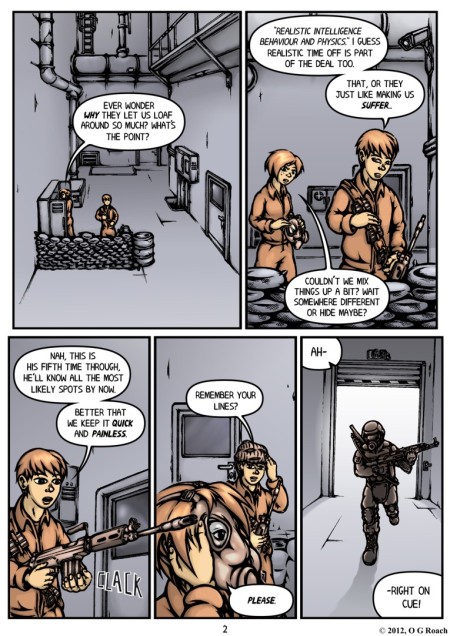 Being in the middle of the short I don’t want to say too much here but the more observant among you may be seeing a pattern in the escalating clichés… Or perhaps you’ve already figured it out :P

Back from the mountains!

Seriously though, that was a shocking gap between posts amongst a history of shocking gaps – I can and will do better. No really!
Bah! Anyway, being my usual fickle self I’ve decided to do this thing in colour after all: 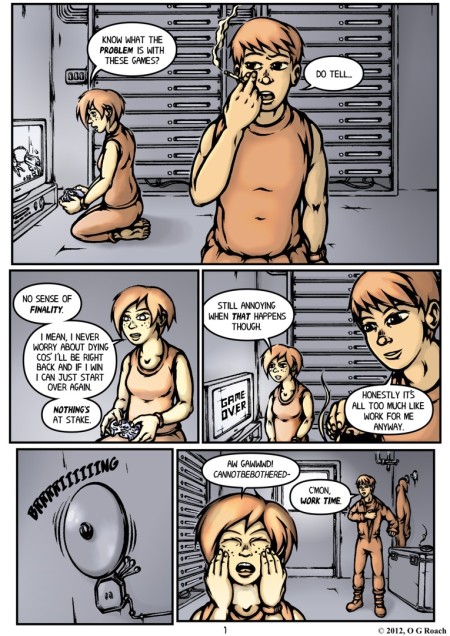 I’ve actually got the next two pages drawn up and the beginnings of a fourth but it felt increasingly like something was lacking, with the art being too anaemic and stark for my liking. I’ve opted for what I hope is simple but striking colour scheme which should give the pages more impact and emphasise the story’s underlying theme.

Given that they only need colour now pages two and three should appear very soon – no really, I mean it this time! – while I’ll ensure I get back to more regular posting and reading of other people’s blogs.

Ever found yourself in that situation?

Where you’re in the middle of something and you just happen to spot a bit of dust on a table? It could wait, indeed it can wait but you can’t. It’s there on your peripheral vision, burning a gaping hole in your attention. It’s got to go.

So you wipe it away, only now you look closely the table is covered in the stuff and you quickly resolve to start what you finish, scrubbing away with naive optimism unwittingly dislodging an avalanche of grey snow; reinforcements quickly follow too forming a vanguard of dead moths, fluff and crusty hairs from parts unknown. You open a window in an attempt to offer a peaceful solution but the invasion is underway; counter attacks have already begun on your nasal passage and eyes. Negotiation is out of the question. 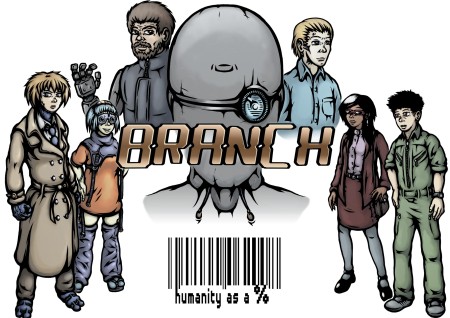 Since you’re probably wondering where the heck I’m going with this overblown analogy I’ll get to the point; allegorically I had that dust situation with the above piece.

As I outlined in my exhibition plan my last hung piece (15) was intended to be a collage made up from existing artwork at A3 size, however as I started piecing it together I couldn’t resist the urge to tinker. It started out small with lines being thinned out for the sake of uniformity or the odd hand being redrawn but before the long that intention had spiralled out of control; the more I changed the more edits I wanted to make and in the end what started out as a quick collage became a full-blown artwork.

Though the end result here is all new, some of the poses will likely be familiar as they are based off old work but the lines and colours are completely redrawn. I went for an ensemble image of Branch’s key cast since it struck me that I have very few promotional pieces; I’ve done a fair amount of work on the comic itself but didn’t get around to creating much in the way bonus or self-contained art. Having felt this lack acutely at the last MCM Expo besides using it here it could additionally be useful for when I’m trying to sell myself in such situations.

On the technical side it’s worth a mention that I tried some new colour and shading methods here; I applied some very faint texture overlays in an effort to create a more interesting kind of graininess and character to clothing and hair, while I also endeavoured to give greater depth to shadowing and more sharply defined highlights. It’s experimentation so the results are slightly hit and miss but as always it’s good to be freed up a bit and try new things.

At any rate, ideally this should make for a strong closing piece to my exhibit, capturing the essence of the comic and its characters generally while breaking up the relative monotony of A4 art on show. There’s a lot more I wanted to do with it that time wouldn’t allow and of course I could of saved myself a lot of work by making a more modest final effort, but for the most part I’m glad I pushed myself this one last time for the MA. While Branch will be ongoing my formal studies end here and it seems only right that ensure everything finishes with a bang rather than whimper.

Strangely, I’m rather glad I decided to pursue this creative dust fluff!