Apothecary Supreme Issue 2, Page 2 – Not Quite 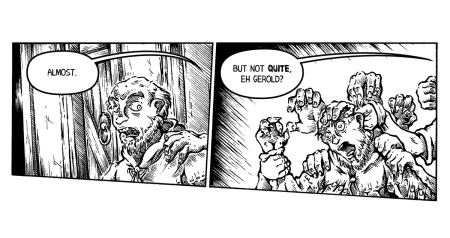 A few folks said my last issue was a bit light on actual horror, so I’m getting right into this time around. Hopefully the scenario I’m presenting here is a substantial departure from that of issue 1.

Time to start releasing these into the wild again!

I’ve been building up a backlog for a while now that could generously be described as ‘modest’, but an update is incredibly overdue so screw it. Much as I’d love to hold off for a little longer, it’s been months and months so I feel compelled to show something for the start of 2018.

I’ll try updating every Sunday for a while and see how far I get :) 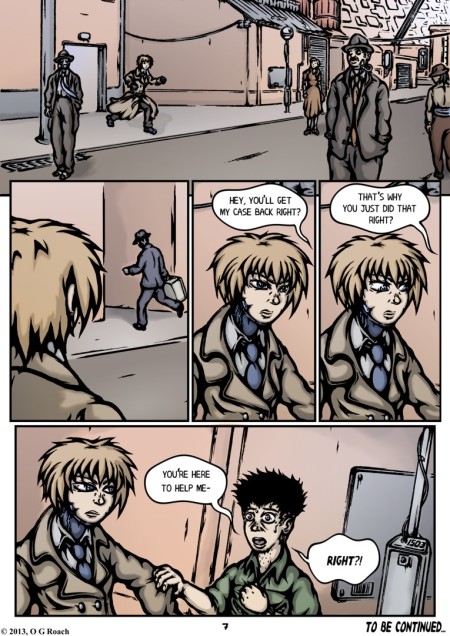 I’m rather pleased with page 6 and the sense of energy carried over from its predecessors, Scratch actually looks like she’s running – instead of dancing as in my early sketches – while the background work and people give a sense of place I often worry is lacking in my recent efforts.

Page 7 isn’t so successful but it’s worth bearing in mind I raced through it in a blur of caffeine and panic to meet the print deadline; the establisher in panel one is modest but efficient, setting the scene without resorting to my usual OCD detailing tendencies while the general flow works pretty well. Not amazing but at least not the distaster I had feared.

It’s been too damn long since I last posted something, but I have been busy – indeed that’s why I’ve lost touch with my updates for the past month or so – so getting straight down to the obvious I thought I might kickstart the old WordPress by briskly mulling over my recent survival of London’s MCM Comic Con and what the future might hold…

First and foremost is the matter of my second issue.

Thanks to various RL distractions, responsibilities, diversions and good old-fashioned poor preparation my page count for Issue 2 pre-Con rocked in around 7 pages excluding the cover leaving me with an unpleasant decision to make; either attend the Con with literally nothing new since last year or release new material in the form of a woefully slim volume. After much tooth gnashing and angst ridden indecision I begrudgingly settled on the latter with the compromise that I would add it as a freebie with Issue 1 and include my short Replay Value to create better value for money.

Needless to say this was not a profitable move, but it felt like the best way to apologise for my stagnation while moving forward even if only a little. It’s a lack of progress which doesn’t stem from laziness or lack of enthusiasm – as I’d literally always be happy to sit down and draw a page – but rather the excision of Branch from my Masters project. Whereas I’d then forcibly made time for planning and drawing in relation to my academia, since graduation I’ve felt bound to pursue things relating to employment and voluntary activities leaving Branch simmering somewhere on the back-burner, often for whole weeks at a time.

There is some good news though; in spite of my own regrets most of the feedback I got at the Con was really very positive with even the criticism I received being constructive and valuable. There was no hiding the brevity of issue 2 but the majority of folks who bought and browsed it at least seemed to like the new content and wanted more. It’s also worth noting that the second of the issue’s last two pages – which I shall be posting shortly – was a 24 hour effort; a desperate, rushed effort certainly and nowhere near my best but it at least proves that the possibility of a decent production rate is there, all I have to do is grasp it.

Additionally outside of the comic itself I’ve made considerable improvements to the way I promote myself; I’m not up there with the people flaunting 6ft banners yet but my presentation and general visibility were both a massive leap over that flat-issues and cloth arrangement of 2012. This time I had a decent stand, an A3 poster and – crucially – a stack of rapidly diminishing business cards. My sales were decent if not exactly earth shattering but it’s nice to think so many passers-by were interested enough to want to look me up later.

As ever with my life uncertainty abounds as to how things will go from here but the one thing I absolutely need to make sure of is that my next issue is a 20 page+ barnstormer of a comic. I know it can be done within this year, I just need to get disciplined and force myself into a balanced production schedule; I’ve made too many promises and received too much support not to make the most of this thing and turnout something truly worthwhile in the near future.

Concluding on the matter of support I’d like to express my heartfelt gratitude to Nikita for all the help on my table, Chris/Ushio and Josie K for putting up with my annoying banter, Chloe, Lee and Kat for letting me stay over and anyone who was kind enough to stop by my table or buy issues of Branch – My thanks to you all!

– Second panel came out EXACTLY how I wanted it; has just the right combination of motion and sexy murder eyes 0_O

– I seem to be getting better at design and placement of SFX.

– Curt’s expressions of horror continue to amuse me.

– Backgrounds are a little too sparse this time around.

– Panel three could have done with more exaggeration and breathing space.

– Perspective and anatomy on the guard is waaaay off in the last panel.