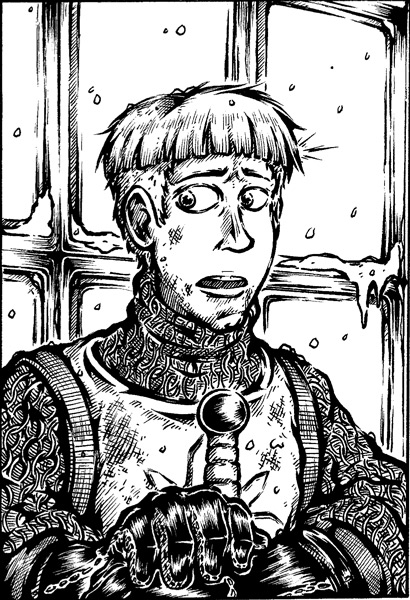 This page essentially wraps up the main dilemma of the story (the ‘dragon’) and leaves me with what is basically a coda for the final three (or so) pages sorting out the loose ends between Burkhard and Greta.

It’s at least reassuring to be so close to the finishing line but I don’t want to launch into a full reflection on the comic/issue’s development just yet since I’m saving that for when it’s done-done. Instead I’d like to briefly ruminate on the future of my work and this comic.

The plan has always been to go back to self publishing and attending expos, however I want to be 100% I have something worth sharing to avoid repeating all the mistakes I made last time around all the way back in 2013. Areas I definitely want to put more consideration into this time are the final printed format, cover and stall. Presentation is an area I previously neglected to my own detriment, something three years in design/marketing day jobs has really hammered home.

More than anything though, tackling a convention stall again is a chance to really test people’s reaction to Apothecary Supreme. I feel that even recouping expenses may be overly optimistic after so long out of the game, but for me getting back into this is both a launch board and experiment to assess what my next course of action will be. I’ve likely mentioned before that this comic was intended as a bit of a test; on the one hand it’s a self contained fantasy/horror story, but could potentially be the basis for other episodic tales of weirdness depending on the response.

If I feel that people want more I will likely continue with other stories in this setting, targeting a faster production cycle and any other weaknesses that could be addressed. On the other hand, should I decide to abandon the story after this at least there is a complete narrative on its own, rather than another unfinished ‘to be continued’. Ultimately it will depend on my feelings once I’ve gotten it out there in printed format.

I did have the London MCM Comic Con in May penciled in as my deadline to wrap everything up and finalise a print run. Unfortunately, it seems I was overly naive in assuming booking a table would be as easy as it was in the past; demand is way up and I’m told all the tables were taken in the first hour of going live, making it about an hour too late in my case…

Aaaaanyhow, rather than be miserable about this I’m taking it as a sign I should adjust my objectives slightly and aim for a smaller expo first. MCM Manchester seems promising and I have a few allies in the area I may be able to summon, so watch this space for updates!

In the meantime, I need to stop wasting my free time in Overwatch and finish this mucky little yarn.

It’s the boys in blue! 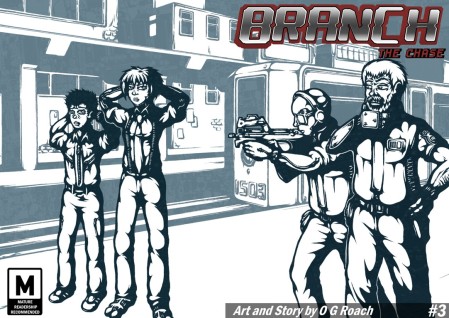 Ahem, that is to say that with the appearance of a notable police lieutenant in this issue it seemed fitting to adopt a bluish tone for my cover this time around.

This one proved rather tricky for a number of reasons; excluding cleanup, colour and text – and unlike its predecessors – I drew it up by traditional means rather than digital, naturally resulting in much head banging – not the rock ‘n’ roll kind – and some copious use of Tipp-Ex along the way. I also learned what a potential nightmare drawing someone holding a submachine gun can be and do not get me started on that bloody monorail train.

Still for the most part it seems like the ambition paid off, the finished composition is suitably striking and different to the previous covers while staying within the same stylistic boundaries. Finishing, annoyingly I realised Scratch and Curt aren’t casting a shadow on the floor thanks to neglecting it in my original draft where their feet go out of frame, but hopefully it’s not too jarring being disguised by the colour-contrast between subjects and backgrounds. If anyone asks I’ll just say there’s a high-power directional spotlight behind them…

Anyhow, as usual I’ve been way too quiet for way too long but my work gears have been a-turning and all being well I should be posting a stream of exciting new stuff in the more immediate future – or rather I’d better because I recently confirmed I’ll be on a table at the London MCM Comic Con again this October! Can’t say I’ve attended two cons in a year before and naturally I went through a signature phase of nail gnashing indecision but it seems like a good move. A year is a long time to hide in a hole by comic standards and even if my promised next UBER issue isn’t realised by then at least I’ll be making some kind of appearance.

Also as usual I’ve completely failed to keep up with other people’s blogs/comics, rest assured I’ll be dropping in soon for my usual rounds of praise/harassment ;)

It’s been too damn long since I last posted something, but I have been busy – indeed that’s why I’ve lost touch with my updates for the past month or so – so getting straight down to the obvious I thought I might kickstart the old WordPress by briskly mulling over my recent survival of London’s MCM Comic Con and what the future might hold…

First and foremost is the matter of my second issue.

Thanks to various RL distractions, responsibilities, diversions and good old-fashioned poor preparation my page count for Issue 2 pre-Con rocked in around 7 pages excluding the cover leaving me with an unpleasant decision to make; either attend the Con with literally nothing new since last year or release new material in the form of a woefully slim volume. After much tooth gnashing and angst ridden indecision I begrudgingly settled on the latter with the compromise that I would add it as a freebie with Issue 1 and include my short Replay Value to create better value for money.

Needless to say this was not a profitable move, but it felt like the best way to apologise for my stagnation while moving forward even if only a little. It’s a lack of progress which doesn’t stem from laziness or lack of enthusiasm – as I’d literally always be happy to sit down and draw a page – but rather the excision of Branch from my Masters project. Whereas I’d then forcibly made time for planning and drawing in relation to my academia, since graduation I’ve felt bound to pursue things relating to employment and voluntary activities leaving Branch simmering somewhere on the back-burner, often for whole weeks at a time.

There is some good news though; in spite of my own regrets most of the feedback I got at the Con was really very positive with even the criticism I received being constructive and valuable. There was no hiding the brevity of issue 2 but the majority of folks who bought and browsed it at least seemed to like the new content and wanted more. It’s also worth noting that the second of the issue’s last two pages – which I shall be posting shortly – was a 24 hour effort; a desperate, rushed effort certainly and nowhere near my best but it at least proves that the possibility of a decent production rate is there, all I have to do is grasp it.

Additionally outside of the comic itself I’ve made considerable improvements to the way I promote myself; I’m not up there with the people flaunting 6ft banners yet but my presentation and general visibility were both a massive leap over that flat-issues and cloth arrangement of 2012. This time I had a decent stand, an A3 poster and – crucially – a stack of rapidly diminishing business cards. My sales were decent if not exactly earth shattering but it’s nice to think so many passers-by were interested enough to want to look me up later.

As ever with my life uncertainty abounds as to how things will go from here but the one thing I absolutely need to make sure of is that my next issue is a 20 page+ barnstormer of a comic. I know it can be done within this year, I just need to get disciplined and force myself into a balanced production schedule; I’ve made too many promises and received too much support not to make the most of this thing and turnout something truly worthwhile in the near future.

Concluding on the matter of support I’d like to express my heartfelt gratitude to Nikita for all the help on my table, Chris/Ushio and Josie K for putting up with my annoying banter, Chloe, Lee and Kat for letting me stay over and anyone who was kind enough to stop by my table or buy issues of Branch – My thanks to you all!